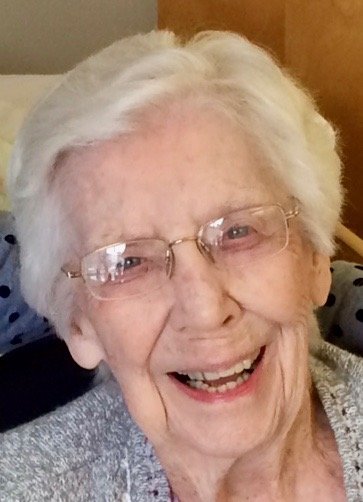 It is with deep sadness that we announce the death of Ruth Elizabeth McGill on August 10, 2019 in Fenelon Falls.

She is also survived by members of her second family, sisters Loretta Leonard, Yvonne Nearing, Barb Sherwin, Helen Vozza, and nieces and nephews.

Ruth was born on January 4, 1931 in Gore Bay, Manitoulin Island. She was the youngest child of the late Elizabeth Marguerite (Wright) McGill and the late James Roger Beverly McGill. She was predeceased by her step-mother Kate, and her sisters, Myra Marguerite (McGill) MacVicar, and Alice Jean (McGill) Purvis.

Raised and educated mainly in Gore Bay, she left the Island to attend secretarial college in Toronto. After graduation, she joined the Metropolitan Toronto Police Force, now the Toronto Police Service, where she enjoyed a fulfilling and distinguished 39-year career.

At the start of her career, Ruth met colleague Rose Leonard and they became fast friends. Ruth left her boarding house and moved to the warm and welcoming home of Rose’s parents, Mr. and Mrs. Leonard. Ruth was soon considered to be a member of the family. To paraphrase Mr. Leonard, what was one more “daughter” when he already had nine?

After retiring, Ruth made her home in Bobcaygeon with sisters Rose and Loretta. (Sisters Geraldine, Laureen, Beatrice Ann, Jeanne, and Lucille predeceased her.) Ruth lived in Bobcaygeon until moving to Fenelon Court in 2018.

Ruth was the salt of the earth – honest and kind – and she will be remembered for her extremely quick and very pointed sense of humour. She could and would have everyone around her filled with laughter by her keen power of observation and sense of humour. Never one to be sentimental, the highest compliment she could pay someone was to tease her or him. You know who you are.

She will be greatly missed.

In lieu of flowers, donations in Ruth’s memory to The Heart and Stroke Foundation of Canada would be greatly appreciated.

To send flowers to the family or plant a tree in memory of Ruth McGill, please visit Tribute Store
Saturday
17
August

Share Your Memory of
Ruth
Upload Your Memory View All Memories
Be the first to upload a memory!
Share A Memory
Send Flowers