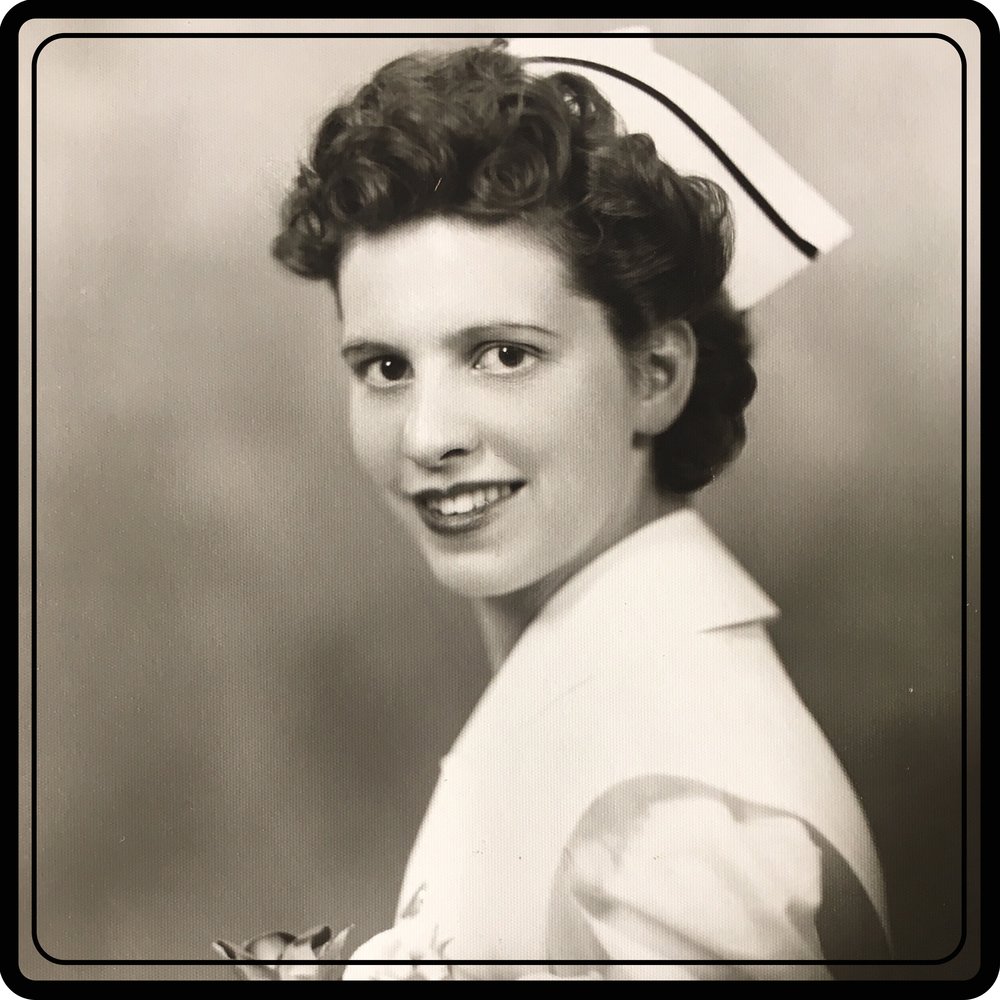 Joan Burgoyne of Dunsford, Ontario, passed away in her 94th year at Ross Memorial Hospital in Lindsay, Saturday, September 7, 2019. Loving mother of daughters Nancy (David), Pat (Rick), and sons Allen (Dale), Brian (Leslie) and Ross (Robyn).  Dear grandmother of Blair, Laura, Jill, Shane, Alexa, Maren, Sierra, Cassandra and Alexis. Born in Crossfield, Alberta in 1924 on the family farm, Joan is predeceased by her husband of 52 years (Russell, d. 2004) parents Allen and Doris Montgomery, and older sister Eileen (Tom Park), and Montgomery brothers, Ernest, Ted, and John, and survived by her sister-in-law, Elaine Montgomery (Ernest) of Calgary. She studied and entered nursing at the Calgary General Hospital (1944-47), followed by 4 years of nursing at small hospitals in Alberta and British Columbia, and spending 2 years in operating rooms. Returning to Calgary in 1952 she met Russell, originally from Prince Edward Island, and they married in December that year in Ontario, where she continued as a nurse in Toronto. They returned to the west moving from Alberta to British Columbia, while Russ was working for Trans-Canada Pipeline, and whose work took them east again to North Bay, Ontario, where Joan had her two youngest children Brian and Ross. Living there for 7 years, Joan did volunteer work for the Ontario Mental Hospital for four of those years. Moving to the village of Smithville (now West Lincoln) in the Niagara Peninsula they then settled there for 23 years, while their five children grew up.  She dubbed herself a "hockey mum", travelling all over the peninsula with her three boys, and played hockey herself on a women's league, taught Sunday school in the local Anglican church, and was an avid bowler and euchre player. She and Russ travelled back and forth across the country for summer holidays, east one year and west the next to visit relatives with trailers and tents, with the five children. She returned to work in 1972 with Ontario Social Services as manager of several residential homes for children and youth with developmental delay and physical disability, retiring in 1988. During this phase of her career, Joan attended university in the evenings, graduating with a B.A. in Psychology and Sociology from Brock University in St.Catherines in 1983. She continued to travel over her working years, including March trips to Florida, on her own to England and Ireland in 1978, with her eldest daughter 'backpacking' in around France and Spain for several weeks in 1982, and toured Manhattan with her two daughters in the mid-eighties. She and Russ moved to the town of Niagara-on-the-Lake in 1988 for two years, and began a love of theatre there with annual trips to the Shaw Festival for many years, even after they moved from the town. Their next move in retirement was to a log home in Tweed, Ontario, with their last move to a house in the country near Dunsford, where she enjoyed gardening, and took up bowling again and playing cards in Dunsford - when not in Melbourne Beach, Florida from winter to spring, where she and Russ migrated to as Canadian 'snowbirds' from 1989 (she continued her stays in Melbourne Beach 5 months of the year there to 2011 on her own after the death of Russ in 2004) and took up watercolour painting there. She continued her summer travelling, visiting her older sister Eileen near Belfast, Northern Ireland annually from 1997 to 2011, and travelling between Ottawa, Mississauga and Waterloo to visit her children and grandchildren.

The family wishes to express their gratitude to the doctors and nurses of the Ross Memorial Hospital both in 2013 and especially last week for their endeavours to enhance her quality of life in the face of serious injury at her age. The family also appreciates the kind and caring staff of Pinecrest Nursing Home in Bobcaygeon and thanks them for their care of "Joanie" while a resident there for the last six years.
Cremation has taken place and arrangements entrusted to THE HENDREN FUNERAL HOMES, MONK CHAPEL.  A private family memorial will take place on September 10, 2019.  As expressions of sympathy, memorial donations may be made to the Alzheimer's Society of Canada or the Bobcaygeon Horticultural Society by clicking the donation tab on this website or by calling the funeral home at 705-738-3222.