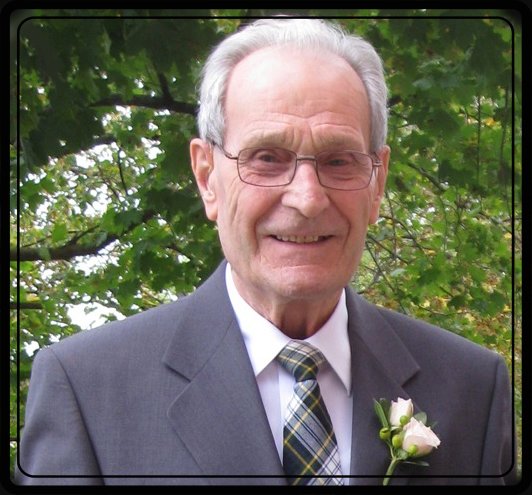 PLEASE CLICK HERE TO REGISTER TO ATTEND THE VISITATION FOR MAC.

It is with both sadness and a sense of peace that we share news of Mac’s death on March 21, 2020 at the age of 94, in the Palliative Care Unit of PRHC.

Mac was born on October 5, 1925, eldest of the 8 children of Thomas and Elizabeth (Bolton) Gordon, in Harvey Township. He was predeceased by his parents, his brothers Jack and Art Gordon, his sister Norma MacPhail, and his beloved son, Tom (1996).

In 1943, Mac left his family’s farm at the age of 17 to enlist. Training completed, he shipped overseas with the Stormont Dundas Glengarry Highlanders. While in Belgium awaiting deployment to the front, the war ended; he then served with the North Shore Regiment in the Occupation Force in Holland, Germany, and France before returning home on April 24,1946.

He and Mildred married on May 6, 1950 at Wesley United Church, and moved to Peterborough where Mac drove city bus for 7 years. In 1958, they built their home of 60 years near Buckhorn, and raised their family. After a brief stint at GE, Mac worked at Outboard Marine for 31 years until his retirement. He and Mildred loved spending time with their family and friends, entertaining grandchildren, playing euchre and cribbage, dancing, camping, canoeing, travelling, bowling; eventually he even gave in to the “ridiculous chase of a little white ball around a golf course!” Always willing to lend a hand and keep busy, Mac grew flowers and vegetables in his gardens and supplied family and friends with fresh produce; he cut and sold firewood, refinished furniture, and above all cherished the time he spent working with their son until Tom’s devastating death in 1996.

Mac’s faith remained strong, and he loved to sing in the choir. The Wesley community remained an important part of their lives even after their return to Peterborough in 2007, where they made a host of new and caring friends and neighbours.

Mac lived a long and full life. Over the past year, his health began to decline and he was admitted to hospital on March 19, 2020. Our family is grateful for Mac’s care over many years by Dr. Tom Richard, and over this past week by Drs. Jonathan Mallory and John Beamish, and the staff of D2 for excellent care in difficult circumstances. We are also grateful for the support of Rev. Rodney Smith-Merkely.

The family is now able to invite you to a time of visitation on Sunday October 4, 2020 from 1:00 – 4:00 PM at The Hendren Funeral Homes, Lakefield Chapel, 66 Queen Street, Lakefield.  Due to COVID restrictions, visitation is limited to a specific number of visitors at a time.  To secure a designated time to pay your respects, please book online at www.hendrenfuneralhome.com. All visitors must remain in their cars in our parking lot and only come to the front door of the funeral home at their designated time.  Please also be aware that social distancing and a mask are required while inside the funeral home.  A private funeral service will be held on Monday October 5, 2020 at Curve Lake United Church and you are invited to watch the funeral service by visiting www.hendrenfuneralhome.com.  The funeral service will be available to watch as of 5:00 PM on Monday. Those who wish may send condolences and/or make memorial donations to Wesley United Church or a charity of your choice by visiting www.hendrenfuneralhome.com or by calling 705-652-3355.

To send flowers to the family or plant a tree in memory of Mac Gordon, please visit Tribute Store
Sunday
4
October

Share Your Memory of
Mac
Upload Your Memory View All Memories
Be the first to upload a memory!
Share A Memory
Send Flowers