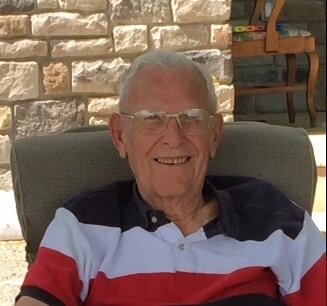 We lost our family patriarch on December 24, 2021, age 89 at Ross Memorial Hospital, Lindsay.  Predeceased by his beloved wife Claire (nee Whitworth) of 64 years.  Loving father of David (Marilyn), Stephen (Carrie) and Brenda (Brent Morreau).  Devoted grandfather of Brandon, Kevin and Andrew.  Howard was the middle son of Hamilton and Alice (nee Hamilton) Robb.  Predeceased by his brothers Jack and Warren.  Howard was born and spent his early years in Calgary, Alberta before moving to Pointe Claire, Quebec where he met Claire and they began their family life together in 1955.

When the children were young the family spent many summers camping first in tents graduating to a tent trailer and then a travel trailer.  Their favourite spot being Fish Creek Pond in Saranac Lake, New York.  In later years Howard and Claire owned several motorhomes enjoying their winters on the gulf coast of Florida and trips across western Canada and the U.S.  Howard and Claire were gracious hosts of many family and friend gatherings where Howard would entertain with his gifted story telling abilities.  Howard’s sense of humour was enjoyed by many family, friends, neighbours, and the Bobcaygeon Alzheimer’s social group.

Howard started working in his early teens at a driving range and spent his entire professional career with Bell Canada first in Montreal and then in Toronto.   Many colleagues became lifelong friends and when they would visit Howard they spent much of the time reminiscing and laughing about the good old days at Bell.  He wanted to enjoy retirement longer than he worked and he certainly achieved that.

After retiring in 1985 Howard and Claire renovated their cottage in Bobcaygeon twice to accommodate the addition of their children’s spouses and grandchildren.  Howard took great pleasure in planning, sourcing materials and doing much of the physical renovation work with his family.   Howard often reflected on how fortunate they were to be living on the lake saying “it couldn’t get any better”.

Special thanks to Keith Singleton for his devoted friendship to Howard especially over the last year and the caring nurses (Courtney and Brayden) on the third floor at Ross Memorial as well as Deb from the Community Paramedic Program.

In keeping with Howard’s wishes, cremation has taken place. A private family service will be held and a Celebration of Life will be announced at a later date.  In lieu of flowers a donation to the Alzheimer Society of Kawartha Lakes or Ross Memorial Hospital would be greatly appreciated by the family.  Condolences and/or donations can be made by contacting THE HENDREN FUNERAL HOMES MONK CHAPEL, 6 Helen Street, Bobcaygeon online at www.hendrenfuneralhome.com, or by phone at 705-738-3222.

Services for Howard Robb
There are no events scheduled. You can still show your support by sending flowers directly to the family, or planting a memorial tree in memory of Howard Robb.
Visit the Tribute Store
Share A Memory
Send Flowers