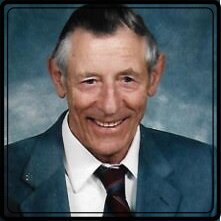 Passed away peacefully at Hospice Peterborough on June 26, 2022. Ken Hook of Bridgenorth in his 101styear. Husband of the late Joan (nee Wannamaker).

A visitation will be held on Monday, July 4, 2022 from 6:00 – 8:00 PM at THE HENDREN FUNERAL HOMES, LAKEFIELD CHAPEL, 66 Queen Street, Lakefield, with a funeral service to follow at the funeral home on Tuesday, July 5, 2022 at 11:00 AM. As expressions of sympathy, memorial donations may be made to Hospice Peterborough. Friends may send condolences to Ken’s family by visiting www.hendrenfuneralhome.com or by calling 705-652-3355.